Jocelyn, a young Haitian man, has worked with the Homes for Haiti (H4H) project since the beginning. 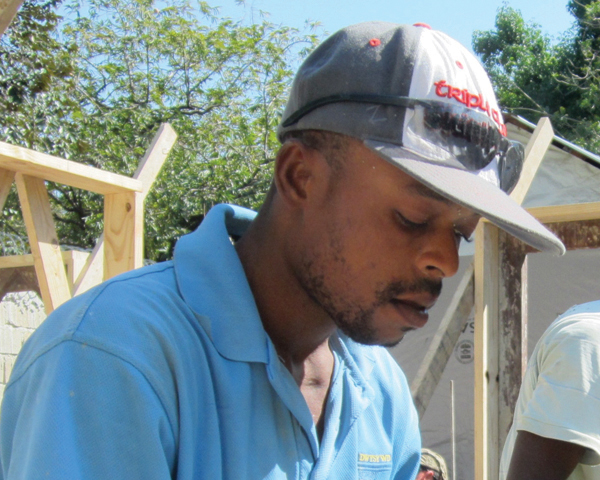 When he started, he was a day laborer. But later, he received training in block laying and stucco work, so today, he leads the construction crews that lay the foundations for all the homes One Mission Society builds.

Since the beginning of H4H, we have started each work day with devotions at the work site. The Haiti work crew, and anyone else nearby, is always invited to join us. So, over the years, Jocelyn had probably heard about 225 devotions before he responded in February 2013 to the Good News of Jesus Christ.

God used countless volunteers, on many of the previous work teams, to touch Jocelyn’s heart and move him to make this life-changing decision. 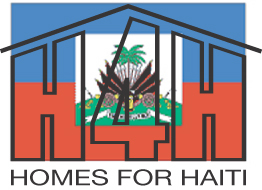 The January 12, 2010, earthquake in Haiti left hundreds of thousands of Haitians either dead or homeless across the southern portion of the country. The world immediately responded to help with rescue, health care, feeding, and short-term housing needs, including One Mission Society. But most of those groups are no longer assisting in Haiti.

In September 2010, One Mission Society launched Homes for Haiti in response to the great need for safe, reliable housing. In the past four years, OMS (through the leadership of our Men for Mission’s short-term coordinator and H4H director, Bill Evans) has sent 63 teams, with a total of 724 volunteers to build 54 homes for Haitian families. God has greatly blessed the ministry by providing the funds and work teams needed to build these homes.

Exciting news: OMS is now taking the Homes for Haiti project to a new level! We have purchased land just north of Port au Prince, in a city called Bon Repos, a rapidly growing community.

Whereas the initial project helped those from OMS-related churches who owned property, the new Bon Repos Project will help the people who cannot afford property or “the poorest of the poor.” 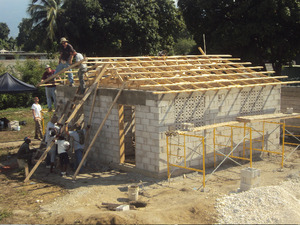 On this land, approximately 3.18 acres, we will build a community church, install wells, and build 35 new homes. The total cost is $600,000. God has blessed us with needed funds to purchase the property and a 1:1 matching grant for these 35 homes. Each $5,000 given will activate the matching grant and provide shelter for one of Haiti’s poorest families.

Will you consider giving to this life-changing ministry project? Your support will bring great blessing to Haitian families displaced by the earthquake and will help establish a church in this rapidly-growing area near Port au Prince, Haiti. You may donate safely and easily online. Please type in project #408063 for the Bon Repos Project, or you may send your gift directly to:

We also have opportunities in 2014 to volunteer with OMS to help build one of these houses. If you are interested in participating on a trip (as an individual or a group), please contact Bill Evans at bevans@onemissionsociety.org, or register online.

The Blind Will See...and Hear

The Blind Will See...and Hear

In Dec 2012, I was with a team made up of university students from the Indy area, my daughter Shelly, daughter Kim and her family of six. We were going to Haiti to build a Homes for Haiti house. The home was for Randishe and Santhia, along with their young son Johnny. We didn't get the home finished in December, but I returned with a team from Colorado in early January and finished the home. During these two trips, I fell in love with this family. Randishe works at a school, and Santhia sells things to help earn money.

They were very much a part of the working team on this home. Randishe helped carry things and do whatever when not at school. Santhia carried water all daylong for the cement work, which was a long steep walk. When Santhia found we liked local coffee, she not only carried water to the site but brought us coffee each day.

We met the extended family members of this couple, several of whom would be living with them in this new home. One of these family members is Randishe's sister Beatrice. Beatrice is in her late 20s and has been blind since birth. She lost her mother when she was several months old. The day of the house dedication, I was visiting with Beatrice and asked her what God was doing in her life. Her response was how God was blessing her with friends. She said, "I never get discouraged." Later, one of the team asked about the earthquake and if she was scared. Beatrice replied, "Why would you be afraid when you have Jesus?"

The house was finished and we returned home. I shared with several the story of the blind girl, and OMS MK, Sharon Mishler, told me that a group from North Carolina sent in an audio Bible to be used. She said the NC team didn't have time to give it to her, which was OK with me as I would be going in February with a team from Philadelphia and some from Sabetha, Kansas, and could take it to her. That was a fun day as another team had the chance to meet the family and present her with the audio Bible. She loved it. Two days later, they let us know it quit working so we picked it up and brought it home. I went back in March, so I brought a new one. Again, another team got to meet her and fell in love with her as well. As we presented it to her, it was neat to watch her other brother guide her fingers over the box to turn it on and off. Beatrice loved the new Bible “box.”

Two months later, home in Kansas on a rainy day, I thought of her and many people who got to meet her. I felt a little of a God nudge, so I called to see if the audio was still working on her radio and to see how she was doing. When she heard my voice, she was excited and knew right away who it was and wondered how all my family was doing. She asked about the different team members that had been there as she didn't realize how far it is from Kansas to Colorado and then to Arizona. Beatrice said everyone was doing well in the family and that the new Bible box was working great.

―Bill Glace, One Mission Society Board member and super volunteer

Is God calling you to be a worker, either on the front lines or in a support role? View all of the opportunities how God may use you to be a missionary.

Dedication to the Gospel

Dedication to the Gospel

A nurse from an island nation in the Caribbean showed great dedication while she was trained to be a church planter. She had to overcome many obstacles just to get to the training session.

Since she has a job as a nurse, working the night shift, she had to find someone to work for her on a Friday night. Leaving around eight in the evening, she took the seven-hour train ride to the town where the training took place.

Arriving at the train station at three in the morning, she was nervous about getting off in that part of town. The train station was located in a poor section, and she was traveling by herself. She ran several blocks, as fast as she could, to the training center, knowing that the Lord would protect her.

She arrived at the training center soon after getting off the train. She slept for a couple of hours before having to arise for the training event.

This nurse then traveled on the overnight train back to her hometown, arriving in the middle of the night. She slept as long as she could before she needed to get up to attend her church, where she plays an active role.

She will repeat this weekend adventure every few weeks until she is trained to plant churches. She, however, will not wait until she has completed the training to start planting a church. As soon as she learns something, she puts this to good use.

Would you be willing to sponsor a training event such as this? For every $27 raised, another person can be trained to plant another church.